Various artists have adopted and incorporated ideas as the tattooing industry has evolved over the years. These concepts are not limited to techniques; the artists have also used new technologies to help take tattooing to a whole new level. UV ink, a new type of ink that glows under UV lighting, is one of the most notable innovations.

Tattoo artists use this ink to create a variety of unique and colorful designs. They combine new and old techniques and technologies to create an eye-catching piece of art. When you see this glowing tattoo, you’ll probably want one for yourself.

Tattoos can have a variety of meanings, but this one is more of a technique than a design. While it has no specific meaning, it can convey a variety of ideas and messages.

You can more or less interpret it to have a specific meaning based on your interpretation. Because UV light glows in the dark or under certain lighting conditions, UV tattoos could be a ray of hope in a time of despair. For some, it may represent a closely guarded secret known only to a select few. At the same time, many people regard it as a pot of one-of-a-kind and treasured jewels that glow in the dark.

Again, because it is a technology rather than a different tattoo class, people do not make assumptions about its meaning. As a result, you can simply leave it up to their interpretations. Of course, your tattoo does not have to have any significance.

Floral patterns are an easy and quick way to express yourself. While these tattoos can be worn by anyone, flowers are typically associated with an appeal to women more than men. This is because they are seen as the embodiment of feminine characteristics such as beauty, elegance, and splendor. You do not, however, have to be a woman to get a flower tattoo.

You can make the colors of the tattoo glow under UV light by using ultraviolet ink. You can have the entire tattoo done in UV ink or just a flower that glows only when exposed to UV radiation. Because UV tattoos are only visible in certain lighting conditions, you can get one even if your family, society, or workplace are against it. You can get a tattoo without bothering or offending others.

Many people are put off by the prospect of having images tattooed on their bodies. You could be one of them. Tattoo embroidery is an excellent substitute for you. Furthermore, Ultraviolet ink works well with embroidery and adds a mystical, even magical touch to it.

You can even combine floral patterns with embroidery to make a stunning combination. The two ideas complement each other in the same way that coffee and cake do. You don’t even have to draw the pattern yourself. You could ask a friend or family member who is skilled in design to create one for you. Alternatively, you can delegate the task to a professional, such as your tattoo artist. If you want to add a personal touch to your tattoo, make sure to share your ideas.

3. X-Rays that Glow in the Dark

This concept is ideal for those who dislike tattoos with simple embroidery or floral patterns. This “X-Ray Style” makes full use of UV ink. To begin, the artist creates a skeletal pattern with bones and joints. You can also request that they add some muscle formations. The tattooist then arranges them directly above the actual bones and joints.

Under UV lighting, this would make it appear as if your body was being X-Rayed. People also modify this concept by replacing the bone joints with electrical circuits and circuit board formations to give off a more cyberpunk vibe. If you’re into that sort of thing, you can go with this as well. 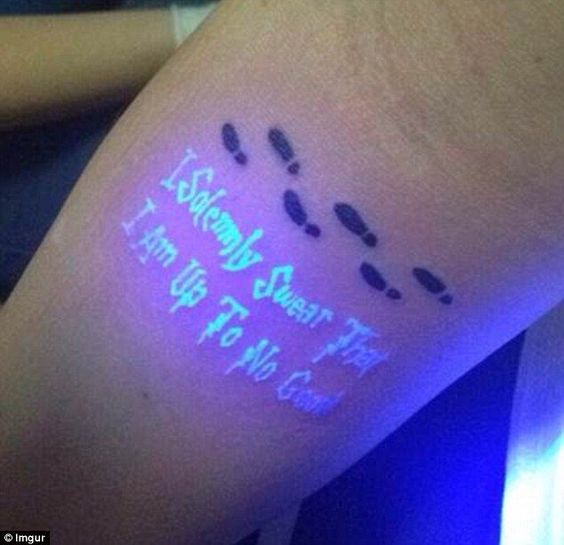 You might not want to get a UV tattoo at all. Many people do not see the appeal of UV tattoos and are content with traditional tattoos. However, once you enter the world of UV tattooing, getting a tattoo with regular ink becomes tedious and uninteresting. You’ll understand when you get alternating UV tattoos that change in design and meaning when exposed to a black light.

Under a black light, for example, you could change a message like “All is well and all is bliss” to “Nothing is well and all is in despair.” As a result, the sentence would differ depending on whether you were standing in the dark or the light. 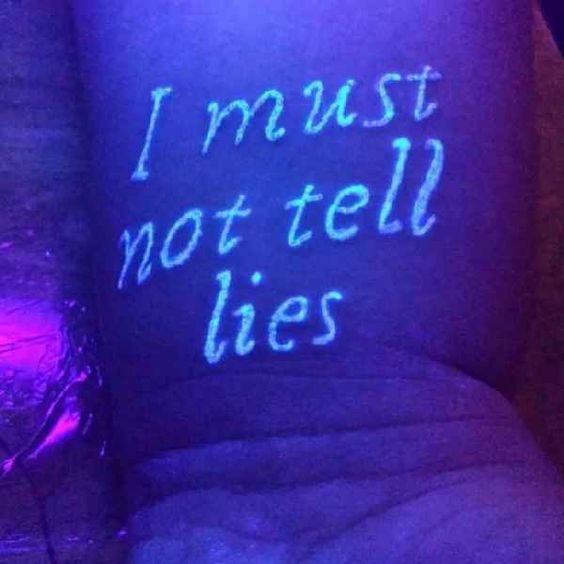 You don’t have to get a complicated design to appreciate the beauty of UV tattoos. Use your imagination to get amazing “letter” tattoos from UV ink.

You could always get a simple quote tattooed on your arm instead. Instead of a quote, you could have some motivational words written in UV ink on your fingers. You could also use the “alternating messages” concept to have a quote or phrase change when exposed to UV light.

Glow-in-the-dark tattoos are those that are made with bright, fluorescent colors that are difficult to see in the daylight. However, these tattoos do not live up to their names: When you turn off the lights, they will not simply glow. Glow-in-the-dark tattoos, on the other hand, usually necessitate the use of a blacklight to activate the glow-like reaction caused by the UVA light it emits. 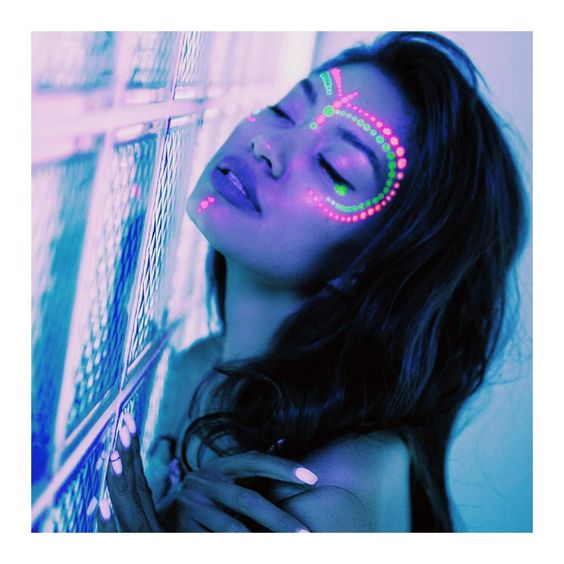 While the ideas above are not any less exciting, they may be too mundane if all you want to do is express yourself. Because your face is the most expressive part of your body, it stands to reason that you get an expressive tattoo there. A simple image, on the other hand, will not suffice, and you will need to use your imagination.

Sure, a UV eagle looks great, but so would any other part of your body. If you’re going for a simple image, you don’t have to use your face. Patterns and designs look best on the face. These can be very expressive depending on how they are built. A pattern with sharp edges and dark colors could represent a stubborn and violent personality. Smooth curves and lighter colors, on the other hand, convey gentleness. Finally, when you turn on the UV light, the entire tattoo comes to life. You can’t get much more expressive than this.

This tattoo is all about adding a little something extra to an already fantastic tattoo. Some people prefer to keep things simple. For them, a simple power button on the neck or hand suffices. Others go all out, such as an enormous cobra with red UV ink eyes or a Phoenix whose wings glow yellow under a black light.

Your tattoo could be a car with indicators and headlights, or a cat with eyes that appear reflective, just like a real cat’s. When you get creative with UV ink, you can achieve a variety of effects under a black light. These effects will aid in conveying a deeper meaning.

8. Wildlife in the UV

This type of tattoo allows you to experiment with a variety of designs. You can get a tattoo of various animals. It also does not have to be a single animal. Mythical creatures are also a good option. The addition of dragons, phoenixes, and some centaurs, as well as a UV effect, will help to make the tattoos even more stunning. The lion, goat, and eagle are three popular tattooed animals. Dinosaurs are another viable option. You can simply get a UV tattoo of a prehistoric scene with dinosaurs.

If you’ve ever seen photos of space, you’ll notice that the colors in those photos and UV colors have a lot in common. Both are very bright and give off a faint glow. Blue, violet, and pink are also popular colors. If tattooed carefully, a UV tattoo of space looks perfect.

The UV colors perfectly capture the cosmos’ majestic aura. This type of tattoo would look best on your back or stomach. A scene from space necessitates a large area, so the artist gains leverage and meticulously draws every detail.

This tattooing style is relatively new in comparison to many other techniques, and it became popular in the 1990s due to the rise of the neon trend. When the style was first developed, artists would use a phosphorus-containing ink solution in addition to traditional pigments. However, because phosphorus is a carcinogen that causes a variety of skin conditions, this technique was deemed dangerous. Due to the dangers of the highly toxic chemical, artists now avoid using ink containing it.

While many people consider clowns to be part of the horror genre, clown tattoos are in a class of their own. Indeed, clowns no longer have the reputation for happiness and joy that they once did. Dillon Forte, a celebrity tattoo artist, says, “These types of tattoos can only be seen under black lights.

Given that most of us aren’t going to raves or putting black lights all over our rooms these days, we won’t get many chances to see the tattoo light up. When creating a standard blacklight tattoo, the artist must be careful not to mix standard, darker pigments too close to the zinc sulfide as this may reduce its ‘glow.'”

Despite the change in aesthetic, clowns continue to be popular. Tattoos of menacing clowns are becoming increasingly popular. UV lighting has been used to give these clowns an even more maniacal appearance. These clown tattoos are ideal if you want to frighten others with your body art.

Snowflakes are well-known for their beautiful, one-of-a-kind, and geometrically precise constructions. However, if you think about it, a simple snowflake tattoo would be quite boring. As a result, enthusiasts have combined the design with UV, giving it a much more presentable appearance. If a single snowflake isn’t enough for you, you can get a lot more. Keep in mind, however, that creating such a complex design necessitates the skills of a skilled tattoo artist.

Glow-in-the-dark tattoos are a fun way to jazz up traditional ink. Most people believe that this tattoo style results in an ever-growing design (which would be cool, wouldn’t it? ), but the truth is that most glow-in-the-dark tattoos only glow when exposed to a blacklight. This tattooing technique is ideal for any of the following three reasons: if you don’t want a particularly visible tattoo; if you want to be the life of the (dimly-lit) party; or if you want to jazz up a standard tattoo.