However, no matter how different your relationship is from that of your mother, you will always have a strong desire to reach out to her whenever you are feeling down or in a bad situation. When you have a mother, you have someone who will always be there for you, no matter what happens.

Mothers and daughters get matching tattoos to show off their unshakable bond and love as a way to commemorate God’s magnificent creation. Even if things aren’t perfect between you and your mother, getting these tattoos is a terrific way to show your appreciation for her and strengthen your bond. You’ll be able to locate a large variety of heartfelt mother-daughter designs. This list of beautiful mother-daughter tattoos should serve as a starting point for your search for the perfect design.

1. Birds of a Feather 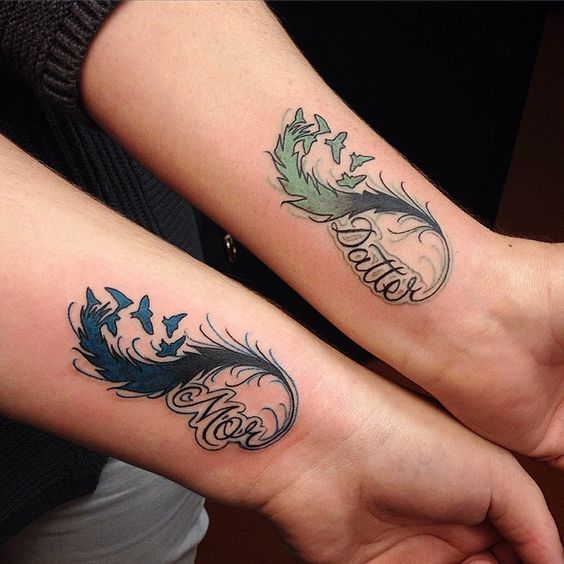 This mother-daughter tattoo of a bird of a feather represents the special relationship that exists between a mother and her daughter. In this tattoo, black ink is used to create a fluffy feather, and then black and white ink are used to create spiraling birds. It depicts the various stages of a mother-daughter relationship. Although they’ve had their share of trials and tribulations, they’ve always remained close-knit.

This tattoo is ideal for mothers and daughters who are separated by distance, as it serves as a constant reminder of the bond they share and the courage and strength they possess. “Birds of a feather flock together,” as the saying goes. This is the ideal mother-daughter matching tattoo that you simply must not miss out on getting. 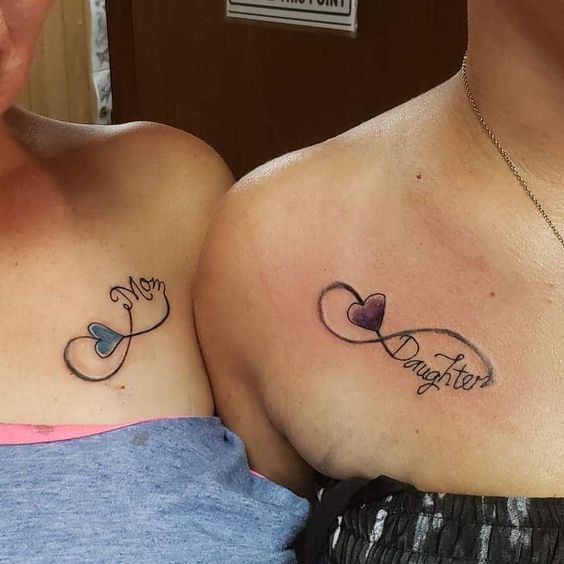 When it comes to getting the perfect mother-daughter infinity flower tattoo, you can also try out this stunning design. With a small black inked sunflower emerging from the infinity sign, this tattoo features a black inked infinity symbol.

You can personalize it even further by writing your name in ink or adding your birthdate initials. This tattoo is significant because it depicts a mother’s unending love, which endures as long as she is still alive. This would look great on the forearm or near the collarbone as the perfect matching tattoo. 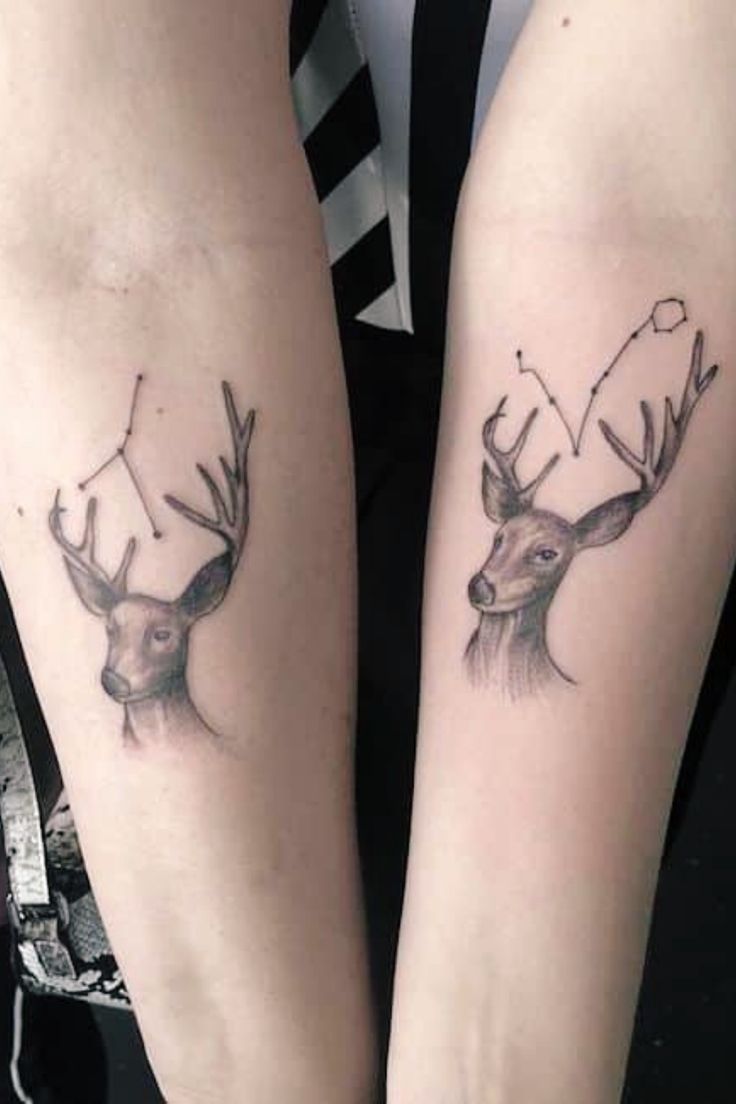 When it comes time for a mother-daughter link-up, the zodiac sign tattoo is the perfect way to express your individuality. Your zodiac signs might be tattooed in black ink instead of your own. The zodiac sign emblem can be tatted as well if you’d want to add some color.

If you want a mother-daughter tattoo that expresses how much you value each other despite your geographical apart, then look no further than these designs. It serves as a constant reminder that you and your loved one are together in spirit.

Because of the zodiac signs, this tattoo has a mysterious feel to it. Getting a tattoo of this design is easy because the size of the tattoo may be altered. 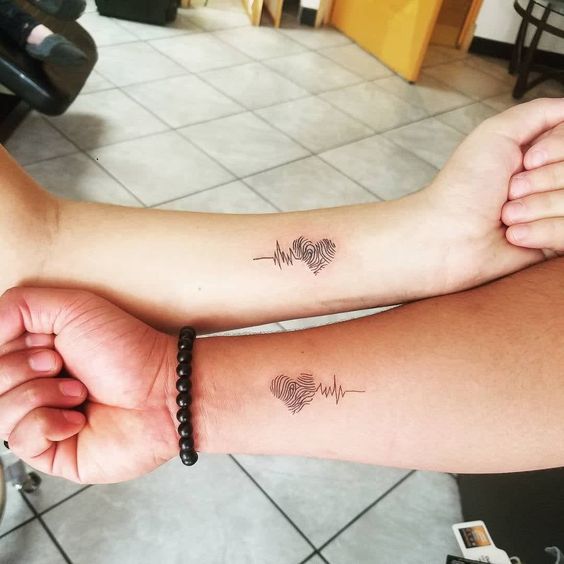 When a mother and daughter are in love, no matter how many problems or misunderstandings arise, this tattoo symbolizes that love. Your upper chest or forearms are the perfect places to have a matching tattoo. 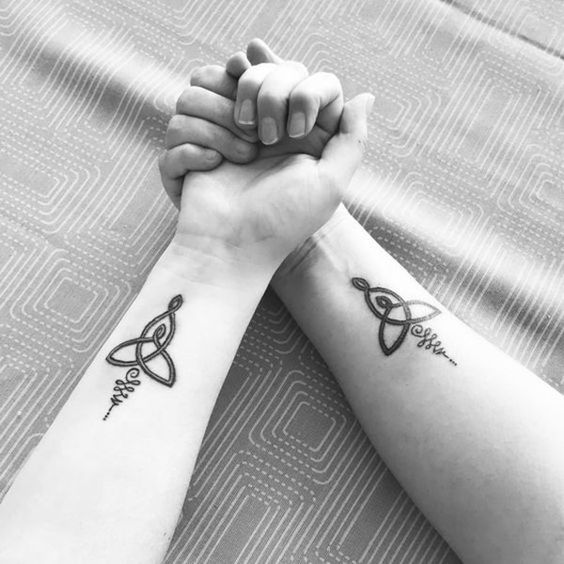 Getting a mother-daughter tattoo with this intriguing Celtic emblem may be just what you’re looking for. The watercolor method is used to include a Celtic maternal sign into the tattoo. This is one of the more altered Celtic tattoos, giving it a distinct appearance. Alternatively, you can get it tatted in black ink if you want the more traditional look of a tattoo.

The Celtic sign for motherhood and the unending love a mother feels for her children is represented by this tattoo. As a reminder to daughters who feel their mothers don’t love them as much as they should, it’s only that every mother displays and communicates her love and concern differently. 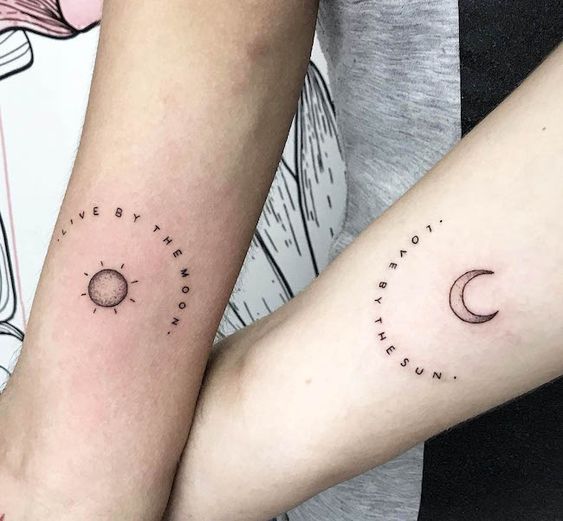 If you’re looking for a mother-daughter matching tattoo, this sun and moon design would be a lovely addition to your torso. It comprises a black inked moon and sun, which appear on either mother or daughter, depending on their gender. Tatting the two symbols together is also an option.

This tattoo depicts a daughter’s reliance on her mother for her survival, and it serves as a powerful metaphor for the bond between mother and daughter. With her mother’s help, a daughter can rise above the challenges she faces and shine brighter than ever before.

The sun is also a symbol of vitality, demonstrating how you and your partner are each other’s source of strength and inspiration. You can get this tattoo on your ankle, arm, or back as a perfect fit.

7. Mother and daughter tattoos with a pinky promise 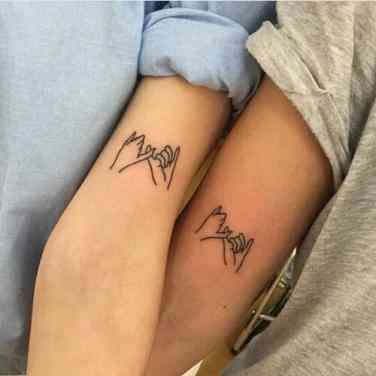 This pinky promise mother-daughter tattoo is a must-try if you and your mother have a relationship that feels like best friends. Two black inked hands are depicted here interlocking their pinky fingers in a promise.

Your mother’s best friend and the vows you’ve made to each other are represented in this way. When it comes to keeping their vows to their children, mothers are unwavering in their devotion. It also shows how close you two are, and how you will inform one other first before anybody else about anything that happens in your lives. 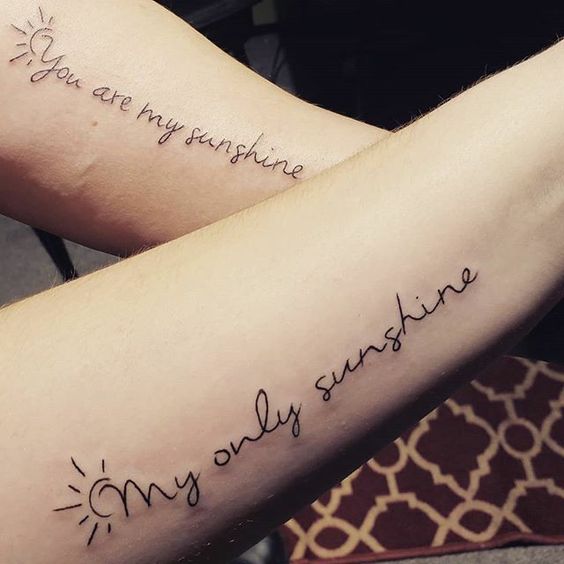 Because of their shared love of words and reading, this mother-daughter quote tattoo is a great option for you. Using black ink and a curving script, this tattoo features a cherished quotation or famous saying from one of your favorite books or movies. To make it more personal, you might also incorporate some of your favorite song lyrics.

To make the tattoo even more beautiful and meaningful, you can include extra components like flowers or butterflies in the design. It’s also an option to have each other’s hands tatted with half of a phrase so that when you come together, the statement or sentence is full. Your tattoo will benefit greatly from this, and it’s something you won’t regret missing out on.

9. lock and a key on the mother’s arm 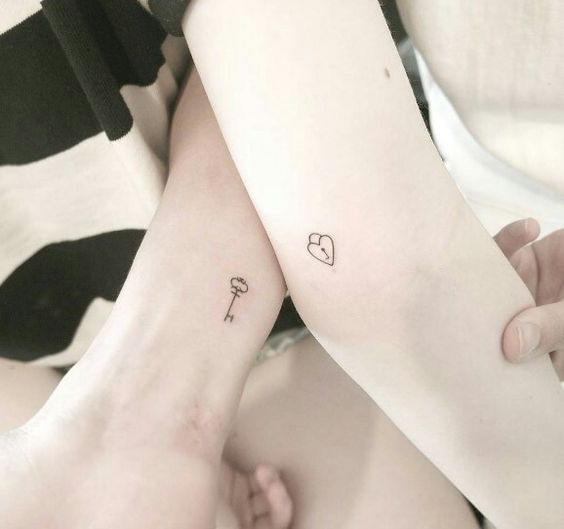 Finally, you can have a mother-daughter lock-and-key tattoo for yourself. It features a vintage lock and key with a pink inked ribbon flowing around it in grey ink. As this is a matching tattoo, you can choose who receives the lock and who gets the key.

Both can, however, be inked on the same hand. Symbolizing the importance of a mother’s love and protection, this tattoo depicts the importance of discovering oneself and thriving in this world. It demonstrates how worthless you would be if you didn’t have your mother’s unwavering support and affection. 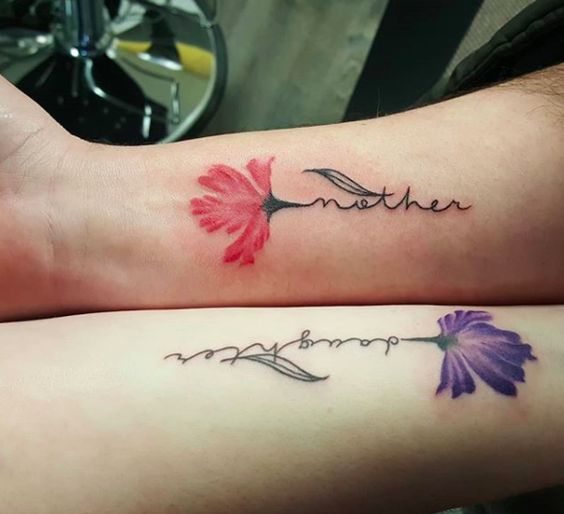 One reason some people get a mother-daughter tattoo is to mend a strained relationship; others do it for sentimental reasons. To remind them that they’ll always be there for each other, especially if they live far apart. Even if you get a mother-daughter tattoo for some other cause, the symbolism and sincerity of the bond between a mother and daughter will always shine through in the final design.